We are broadly interested in the ecological and evolutionary mechanisms that determine species ranges and maintain populations within these ranges. Our research includes genetics, community ecology, biogeography, and conservation biology, with a special focus on marine ecosystems.

The ever-increasing environmental impacts derived from human activities have extensively modified evolutionary trajectories of populations across species ranges. Biological invasions are both direct and indirect consequences of such large-scale anthropogenic impacts, and constitute a crucial factor shaping biodiversity and biogeographic patterns worldwide. There is growing recognition that biological invasions are often extremely complex due to the high prevalence of multiple sources and non-independent introductions. However, the relative importance of the trade-off between losses of genetic diversity due to bottleneck processes during colonisation, and high genetic diversity as a result of multiple origins or introduction events, remains to be fully understood. In order to track routes of invasion of a widely distributed species, we have developed new molecular tools and implemented innovative analytical techniques that allow contrasting a wide range of complex scenarios.

General questions include:
– Can the native range be reliably identified? If so, is genetic admixture responsible for the genetic composition of the introduced range?
– Are colonisations generally non-independent?
– In what sequence have introduced populations been colonised?
– Are genetically-diverse populations a result of a single introduction of a large number of genetically heterogeneous individuals, or of recurrent introductions? 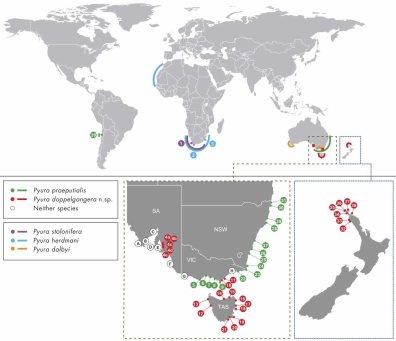 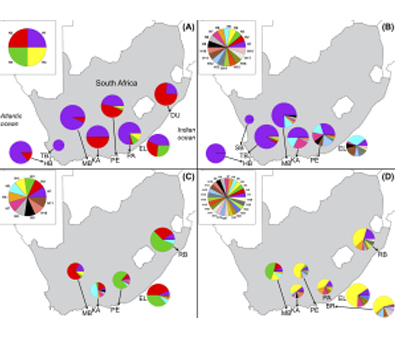 The mechanisms that determine the introduction, establishment and spread of non-indigenous species can only be correctly interpreted by first obtaining rigorous historical data. In addition, acquiring ecological data on life-history traits within its introduced range is vital to understand relevant key characteristics of the invasion process such as generation time and adaptive phenotypic plasticity. We have assessed the magnitude and characteristics of marine and estuarine introductions along coastlines using both a regional and global approach. 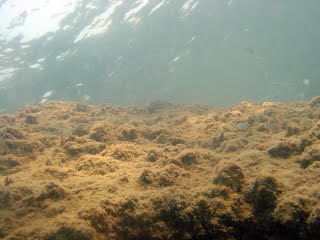 Many of the world’s coastal regions contain a large proportion of marine species that cannot be clearly identified due to a lack of systematic, biogeographical and historical evidence. The increasing availability of DNA sequence data has improved this situation, resulting in an increase in the identification of cryptic biodiversity.

We combined a morphological analysis with genetic data to unravel cryptic speciation within a widespread species complex that is highly abundant along temperate coastal regions of the southern hemisphere, namely the Pyura stolonifera species complex. This species complex is popularly known as cunjevoi in Australia and as redbait in South Africa.

Our research has revealed that in Australasia this complex comprises three species (two new to science) that are both morphologically and genetically distinct, and not one species (Pyura praeputialis) as previously thought. This work has been highlighted in both scientific and popular articles, including a piece entitled ‘Molecular view reassesses species’ published in Frontiers in Ecology and Environment, where the controversial topic of species delimitation is discussed and framed around the assessment and conservation of global biodiversity.

While studies have investigated key community traits such as biotic resistance during adult stages, there is little understanding of the relative importance of processes affecting early life-history stages and their carry-over effects. we found that lethal and non-lethal effects on early life-history stages can determine the viability of adults of native sessile species. In addition, we studied selection pressures in a species with complex life-cycles, in which mothers must balance the fecundity costs of increasing propagule size with the fitness benefits of increased propagule performance.

Larva of Pyura herdmani obtained by artificial fertilization in the laboratory

The results untangled the influence of abiotic factors in mediating biotic interactions and coexistence between newcomers and well-established species. Through this work we addressed questions such as:

– Are positive and negative interactions temporally and spatially partitioned?
– How are species interactions maintained over long periods? 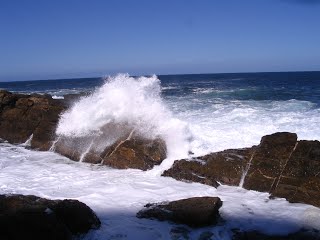 Wave action is one of the primary causes of disturbance
on rocky shores, often preventing dominant competitors
from monopolizing primary space

Marine Protected Areas (MPAs) are crucial for conservation biology and management. Most studies of MPAs focus on the recovery of top predators with fewer studies focusing on lower trophic level organisms. In my early work, we assessed the impact of recreational exploitation along protected and non-protected coastlines in southern Europe, as well as how inaccessible or formally protected areas are beneficial to the recovery of exploited populations. In South Africa, we studied how ancestral subsistence exploitation is reconciled with modern day conservation enforcement. 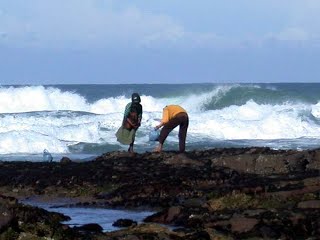 Human harvesting is an ancestral activity 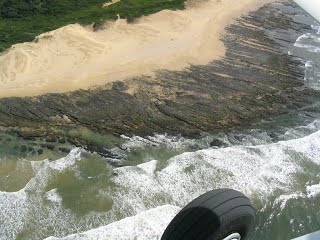